Five years ago, I wrote an article about what I’ve learned the hard way about limitations on a service dog’s ability to “save the day” by bringing a disabled person a portable phone in an emergency. The article provided insight on how dogs think and it suggested strategies for overcoming the inherent problems that exist.

Last week, someone sent me a sobering newspaper article in which Murphy’s Law in connection with the phone retrieval task nearly cost someone his life. Because of this near-tragedy and the fact we have hundreds of new readers, I’ve decided to re-visit the subject, updating my original piece, expanding the training advice, with the goal of improving the safety of assistance dog partners who rely on this task.

I hope to never read another newspaper story like the following.

Highlands Ranch; Colo. – A disabled man who slipped and fell in his bathtub was trapped there for six days before he was rescued by a van driver who arrived at the house for a scheduled trip.

Bruce Ashworth, 55, who has multiple sclerosis and uses a wheelchair, fell Aug. 29 and was unable to reach the safety handles on the bathtub to rescue himself. His service dog, Libby, brought a phone to him, but the battery wasn’t charged.

Ashworth managed to reach a cleaning spray bottle, which he rinsed out and used to drink water.

As the days stretched on, he said he drifted in and out of consciousness, and Libby would lick his face to wake him up. Ashworth worried he would die.

Then, on Thursday, Julie Johnson, who drives a van for elderly and disabled people, arrived to pick up the retired engineer for a scheduled trip. When no one answered the door, she asked a neighbour to call 911, then through a dog-door she unlocked a door into the home. She found Ashworth in the bathtub, barely coherent.

Firefighters took him to a hospital.

A crucial part of my independent living plan is to have a service dog trained to bring a portable phone to any room in the house, even into the shower, so I will always be able to call for help in a medical crisis. It is a task that has given me the courage to live on my own instead of moving in with relatives. However, I had to learn “the hard way” over the last twelve years how much I didn’t know about a dog’s capabilities and limitations and human folly before this task truly became a dependable safety measure.

I started out teaching the phone task as an object command. That was pretty easy. Then I asked my dog to find the portable phone when it wasn’t it plain sight on the living room floor ten feet in front of my wheelchair. I expected the dog to learn to search a half dozen possible locations where the portable phone might have been left by the last person to use it. This idea proved to have too many drawbacks for emergency use. For example, if the object happened to be sitting on a counter, table or dresser top, above the dog’s eye level, the dog would almost certainly pass by it without noticing it.

My service dog’s behavior reminded me of the classic experiment conducted by scientists in the 1940’s who were investigating canine vision. The dogs quickly learned to go into a room and push the lever on a box to get a dog biscuit. It didn’t seem to matter if the lights were on or off. The dogs found the lever in the dark as easily as they did with the lights on. After many successful trials, the box was turned a quarter-turn to the right. The lever was in plain view. All of the dogs went directly to the place where the lever used to be and pathetically pawed the air. None of them ever learned to utilize the lever in it’s new location. There was nothing wrong with their eyesight. The conclusion drawn was that dogs just don’t rely on their vision the same way that people do.

To me it illustrates the power that force of habit can have on a dog’s reasoning powers. If we repeatedly condition a dog to go a certain place and perform a certain action, like picking up a phone from a battery charger to obtain a reward, this habitual response to our command will eventually becomes an irresistible compulsion. In a good way, it can blind a dog to any and all distractions that might deflect him from his mission, like a pet cat crossing his path or a food that is left unguarded due to the collapse of his human partner. At the same time, however, it also blinds him to something we might wish he would see, such as the phone sitting on a nearby piece of furniture. He will reach the battery charger and be utterly baffled by the absence of the portable phone. It will not occur to him to search the room or the house of his own accord. Nor will he automatically go to another location where he could find another plastic phone similar in shape and color, not of his own volition. He is obsessively fixated on carrying out the job we conditioned him to do. It is up to us to make the best of this idiosyncrasy.

As a service dog trainer who volunteers her skills to a service dog program, I’ve personally been able to experiment with teaching the phone retrieval task to twelve service dog candidates over the years. I’ve concluded the most effective way to obtain a reliable performance is for you to purchase a portable phone for emergency use only. Locate its battery charger on the floor in a spot where people won’t stumble over it. I keep mine on the floor between the couch and a bookcase in my den, by way of example. Make it a “place command” so the dog will always go to that same location when he hears the command word “Phone”. (You could use any command word, such as “Ringer” or “Charger” or “Get Help!” if you already taught your dog the word “Phone” as an object command.)

Begin by training a service dog candidate to retrieve the Emergency Phone from a distance of five feet away from the battery charger, then ten feet, then fifteen feet, gradually increasing the distance in small increments, till you reach your favorite armchair. When the dog masters the job of bringing the phone to you in your armchair without dropping it, go back and start over, teaching him in increments of five feet, “the path” to your bedroom. Don’t rush it. Build up his confidence at each step along the way with lavish praise and/or treats, making him feel like a hero. Then select another part of the house, the kitchen perhaps, and repeat this foundation training. After that, the dog will probably generalize and be quite willing to retrieve the Emergency Phone if sent to get it from any room in your home, even from the bathroom or basement, when he hears the specific command associated in his mind with the location of that particular phone.

At one time I thought this level of training would suffice. However, practicing this particular task under ideal conditions week in and week out as I once did is living in a fool’s paradise. A medical crisis or some other calamity rarely will occur under textbook perfect conditions. Therefore most important phase of the training still lies ahead. I draw upon my own experiences and that of students and friends whose service dogs did not complete the task when needed, when I urge you to give the dog the extra training suggested to prepare him to cope with real life situations. 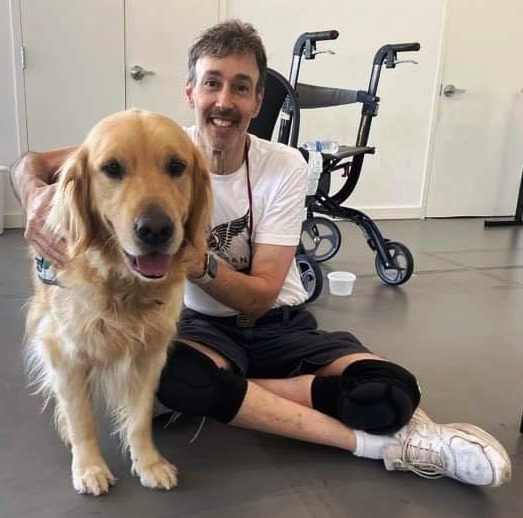 Murphy’s Law says Whatever can go wrong, will go wrong. The one time you really need the dog to perform this task could be the one time you forget to return the emergency phone to the battery charger after a training session. Other things may go wrong, such as a family member shutting the door to that room earlier in the day, cutting off your service dog’s access to the phone. Recognize that Murphy’s Law is a real danger and while you can’t anticipate everything, there are important steps you can take help ensure you live to tell the tale.