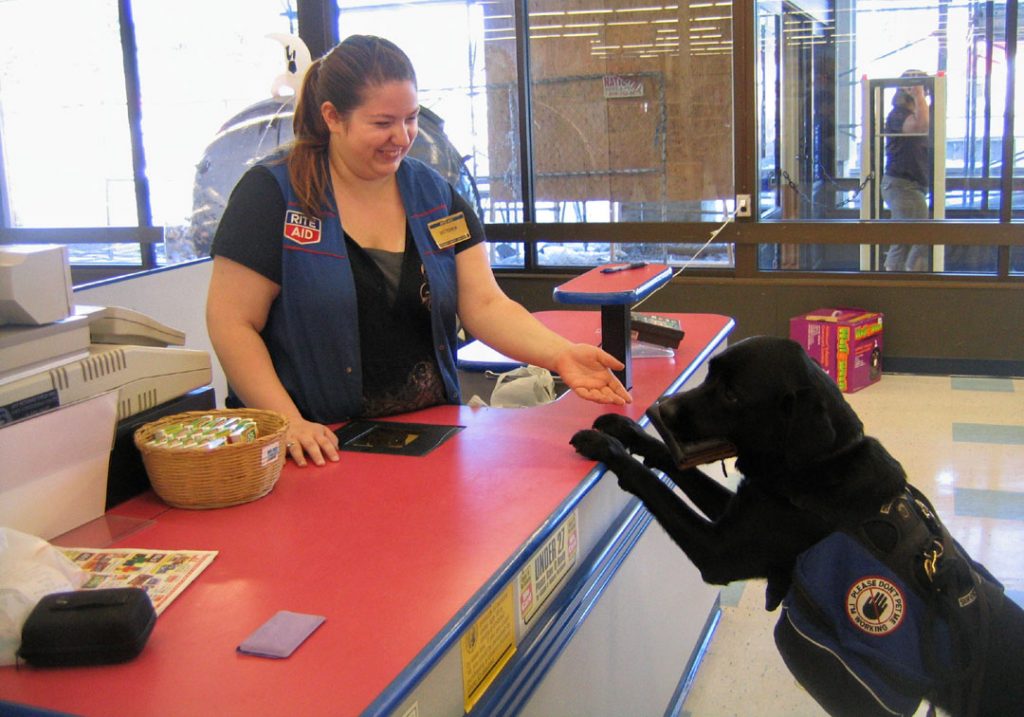 Like a number of people who set out to train a service dog for themselves or others, I’ve had to reinvent the wheel on certain tasks, figuring out for myself how to persuade a dog to cooperatively carry out a desired objective. It is only recently that I have learned that the methodology I developed years ago for teaching the foundation skill for tug based service dog tasks is not common knowledge. I think it can overcome some of the difficulties other trainers report. I have decided to share it in Partners Form, so as to increase the options service dog trainers will have to choose from when working with a puppy or adult service dog candidate.

Even dogs who enjoy the game we call “tug of war,” usually balk when first asked to tug on a strap attached to a large inanimate object like a door. While the trainer may be willing to reward the candidate with a treat if the dog opens the door by tugging on the strap, how is the dog supposed to know that? We can’t reward him if he won’t even try.

As a bridge between playing tug of war and cooperatively performing a service dog task like opening a door, I teach puppy and adult candidates a game I call “Tug for Treats.” In the first few days, the main objective is to tease the dog into making a grab for a nylon strap I jiggle around his head. As soon as he makes mouth contact with it, I let go, allowing him to “win.” I simultaneously show him the treat in my hand, enticing him to return and trade the strap for the treat. He can drop it or allow me to take the strap out of his mouth as he eagerly accepts the hot dog, chicken scrap or some other irresistible tidbit. Once in a while, a die-hard tug of war fan may run around flaunting the strap, gloating over beating his human opponent, not yet fully appreciating the strap is just a means to an end….a way to earn a wonderful treat! It is just a phase. By the end of the first week, every dog will be a star pupil.

I limit this foundation skill training to a maximum of two sessions per day, five tugs per session, to avoid burn out or boredom.

It is essential to induce a playful mood in the dog when introducing this new concept. The best technique I’ve come across is to imitate the rumbling sound of a dog’s growl. Dogs invariably interpret this sound as an age old invitation to play. Utilizing this technique will greatly increase the chance of a successful outcome, especially when working with a dog who has not shown prior interest in tug games. I also employ this sound to stimulate the dog’s interest whenever I raise the difficulty level for earning the treat. Later, it becomes an outstanding “transition cue” when I start urging the dog to pull on a strap attached to a door knob, a laundry basket or some other item. [ hey, I’d stand on my head if I thought it would help the dog learn faster!]

This tug for treats concept needs plenty of repetition to psychologically prepare the dog for the challenges of tug based service dog tasks. Give it at least a month. During the first week, make it absurdly easy for a dog to win. In the second week, mild resistance on your part will require a harder tug on his part. By this stage, a milkbone reward and praise should suffice. You can also introduce the command “Pull” in an excited tone of voice. In the third week, it should take a strong tug from the dog to wrest the strap from your grasp. For puppies under six months old, the tug training should stop here. If you make it too hard for them, it will backfire.

For more mature dogs, the length of time the dog must tug before you release the strap should gradually be increased from two seconds to ten seconds. Make some of the tugs easier than others. Keep it fun. The overall goal is to build up the dog’s confidence in his ability to “win,” so he will persist when he encounters serious resistance, such as that offered by the rubber seal on a refrigerator door or the weight of a sliding glass patio door.

To keep the dog’s confidence high, I introduce each tug based task according to its difficulty level, beginning with a kitchen cupboard door, then we graduate to lightweight interior doors, then to the refrigerator door, the stove drawer, a front door lever handle, and last but not least, a sliding glass patio door. During the first couple lessons on each, I show the dog a special treat like liver or a hot dog slice to spur his interest in trying the new task. Don’t rush the dog into tackling all these tasks in the same month, as haste isn’t the way to achieve lasting results. 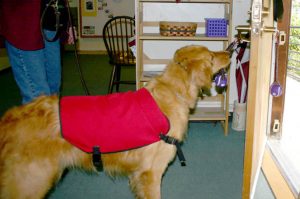 I recommend you begin with the bridge-command “Pull” and don’t substitute a place-command like “Fridge” or “Doorbell” till the dog is very familiar with a particular task and performs it eagerly. Other introductory pointers would be to jiggle the strap, give an imitation growl, and guide the dog into the correct angle for pulling, to optimize his chances of success on the first try. If he backs off, tantalize him with a mouth watering treat, as the sight of it can often overcome a dog’s coyness or apprehension. If he continues to balk, remain cheerful, as if it is no big deal. Just try it again the following week, while building up his confidence in other areas.

Most dogs will “ace” a tug based task within the first week. As soon as the dog performs as desired, you may slowly begin to add distance between yourself and the target in increments of five feet a week, if desiring to send the dog to do the task from another room someday.

After three months of schooling on each task, it should be possible to phase out the treats and simply rely on praise to motivate cooperation during practice sessions. Best of luck!